The first mention of a basket manufacturing process is in the Kalhana Rajatarangini, a book written by the great engineer Suyya, who regulated the path of the Jhelum River in the early 14th century. In this book, Suyya uses the Kangri technique to save villages and the people in them. In his later years, he became the ruler of the valley and became the chief of the Shalabugh village.

Today, the process of weaving willow is more sophisticated than ever, and the artisanship is increasing in popularity. The process begins in February-March with the planting of the willow saplings. After the willow harvests are harvested, the harvesters gather the stems and sort them by length and girth. The farmers then sell the withy to contractors who make wicker baskets and other products from the willow. Once the willow stems are harvested, artisans boil them for one night in huge water boilers to soften them. Then, they are peeled and stripped of bark with special sticks called zealan (in Kashmir). The willow stems are then dried under the sun until they are completely dry.

Willow weaving is the only industry in Kashmir that was not destroyed during World War II. As the valley was devastated by floods, the Suyya tribe developed circular dykes around their villages, which helped protect their homes. In 1914-16, Britisher Andrews established a technical institute in the valley to impart English wicker weaving techniques to local craftsmen. This taught them the skill and technique of weaving willow. 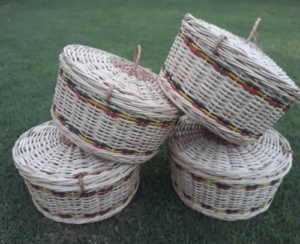 While willow weaving is no longer widespread in Kashmir, it is still important to support this industry. The craft is an attractive, environment-friendly, and indigenous business. The Kashmiri willow basket manufacturer is dedicated to helping the industry thrive. The finished products are used for household utility, decoration, and for storing edibles during celebrations. They are a wonderful addition to any home or office. There are many different uses for these beautiful handmade products.

The art of weaving willow baskets in Kashmir originated in a remote village called Shalabugh, which was awarded the status of ‘Model Village’ in 2002. The Shalabugh model village is home to the most prominent willow artisans in the valley. As a matter of fact, almost 90 percent of the people in this small village have been associated with the willow crafts for at least 50 years. The craft is one of the oldest in the world and is the source of livelihood for nearly six thousand people.

Willow weaving is an environmentally-friendly craft that is aesthetically pleasing and environmental-friendly. The art of weaving willow in Kashmir is an integral part of the traditional economy of the valley. It has been a successful and thriving industry for over 150 years in the valley. With its traditional methods and innovative designs, the craftsmen of the region have won numerous awards for their unique products. However, the craft of weaving willow in Kashmir is a relatively newer and more complex craft.